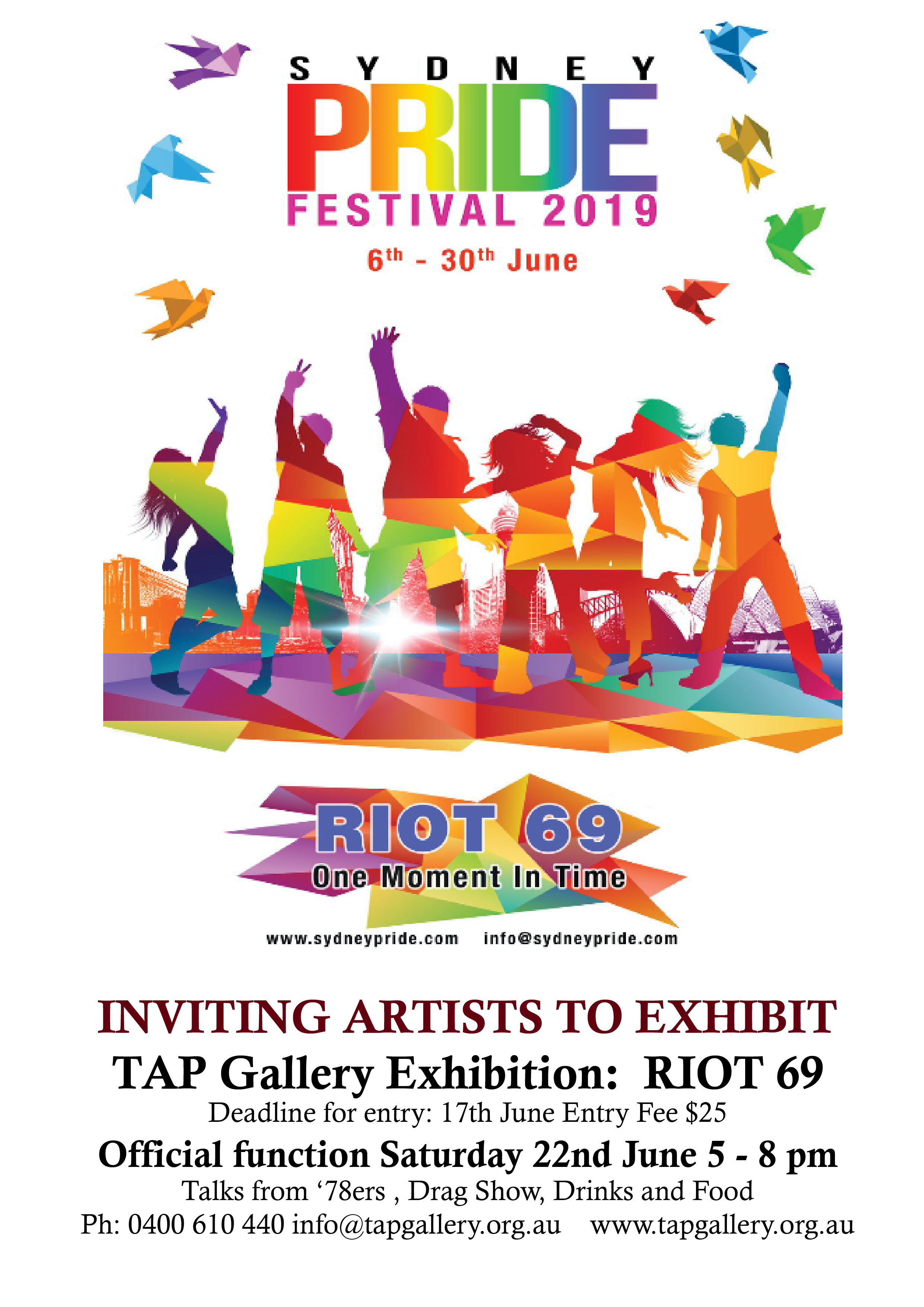 Update to TAP Art Gallery Exhibition as part of Pride Month:
“Riot 69 – One Moment in Time”
from 17th – 24th June 2019 5-8pm
Our guest speaker to open the Exhibition will be
Activist and Mardi Gras 78er, Peter de Waal AM, will be the guest of honour at TAP Gallery, 259 Reilly Street, Surrey Hills on Saturday 22nd June 5-8pm to officially open the 2019 Pride Exhibition – “Riot 69”.
He and his late partner Peter “Bon” Bonsall-Boone AM, started their activism as being CAMP Inc – the Campaign Against Moral Persecution – foundation members in 1970. CAMP Inc was the first national Australian homosexual rights movement. Next year will the half-century anniversary of the CAMP Inc founding.
The setting up of Phone-A-Friend happened in Bon and Peter’s front room of their Balmain home in 1973. It was the first Australian specific ‘phone service for our community. It being the forerunner to the Gay and Lesbian Counselling Service which is now called Twenty10.
Peter has also many honours and most importantly he and Bon both were awarded Membership of the Order of Australia AM level in 2017. “For significant service to the community as a LGBTQI advocate and author, and through a range of volunteer roles.”
Peter and Bon did also feature – together with a lesbian couple – on the 1972 national ABC TV Chequerboard program about their lives as a couple living in the suburbs. On that program they talked about becoming a couple in 1966. The same program ‘proved’ their coupleness with the first ever Male to Male kiss on Australian national TV – maybe even the World.
Peter and Bon characters did also featured in the ABC national telemovie called Riot – telling the history of the first 1978 Sydney Mardi Gras, which screened in 2018.
You must come along to hear his story that is part of the rich tapestry of the Pride movement.

DON’T FORGET DEADLINE FOR ENTRIES
June 17th Entry Fee: $25
The Sydney Pride Festival is a special time for the LGBTQI community as we remember the history and celebrate the present and look forward to a day when everyone is Equal.
Official function: Saturday 22nd June @ 5 – 8 PM
Venue: 1/259 Riley Street, Surry Hills
info@tapgallery.org.au www.tapgallery.org.aui
0400 610 440

One moment in time

This year’s Pride theme is “RIOT 69” One moment in time. Remembering the Riots of 1969 at the Stonewall Inn Greenwich Village. The Heroes that lead the way and fought for our rights 50 years ago. The beginning of the modern gay movement and the inspiration to the 78er’s who paved the way in Sydney. The LGBTQI community are all under one fabulous Umbrella and together we continue to create change and acceptance. Homosexuality is no longer illegal in Australia, Marriage Equality has been achieved and our community has shown that the Riots of 1969 will always be remembered as the beginning of the Pride Movement.

Sydney Pride Festival is a grass roots festival and a time to pass on the history and raise awareness and education of our LGBTQI Charities. This year we will be putting a focus on the strength of our Community and remember our pursuit for acceptance and total Equality for all our LGBTQI brothers and sisters. Sydney Pride can reach out and help those struggling with Sexual identity, bullying, drugs or just feeling that life is too hard to stand strong and ask for help. Standing Together in Solidarity. This is Pride!

The Sydney Pride Festival is a special time for the LGBTQI community as we remember the history and celebrate the present and look forward to a day when everyone is Equal. Sydney Pride Festival is a not for profit event which supports a wide range of LGBTQI Charities, Organizations and businesses. This Sydney Pride festival will include events throughout Sydney that are fun and affordable for everyone. The events will raise much needed funds for Charity and showcase our community and achievements.

This is a time to remember the 50th anniversary of the Stonewall Riots and the beginning of Gay liberation as we know it. The Sydney Pride festival is dedicated to those that lead the way back in 1969 who fought for equality and human rights and the incredible strength of our friends who marched in the first Sydney Mardi Gras in 1978.

Last year the Sydney pride Festival contained over 100 events. The festival will feature Art, Cinema, Trivia, Debates, Sports, Fundraising activities and Club events across Sydney. The Sydney Pride Festival would like to thank the volunteers, event organizers, sponsors and LGBTQI community and all our friends for all their support.

We are currently seeking expressions of interest in holding events. 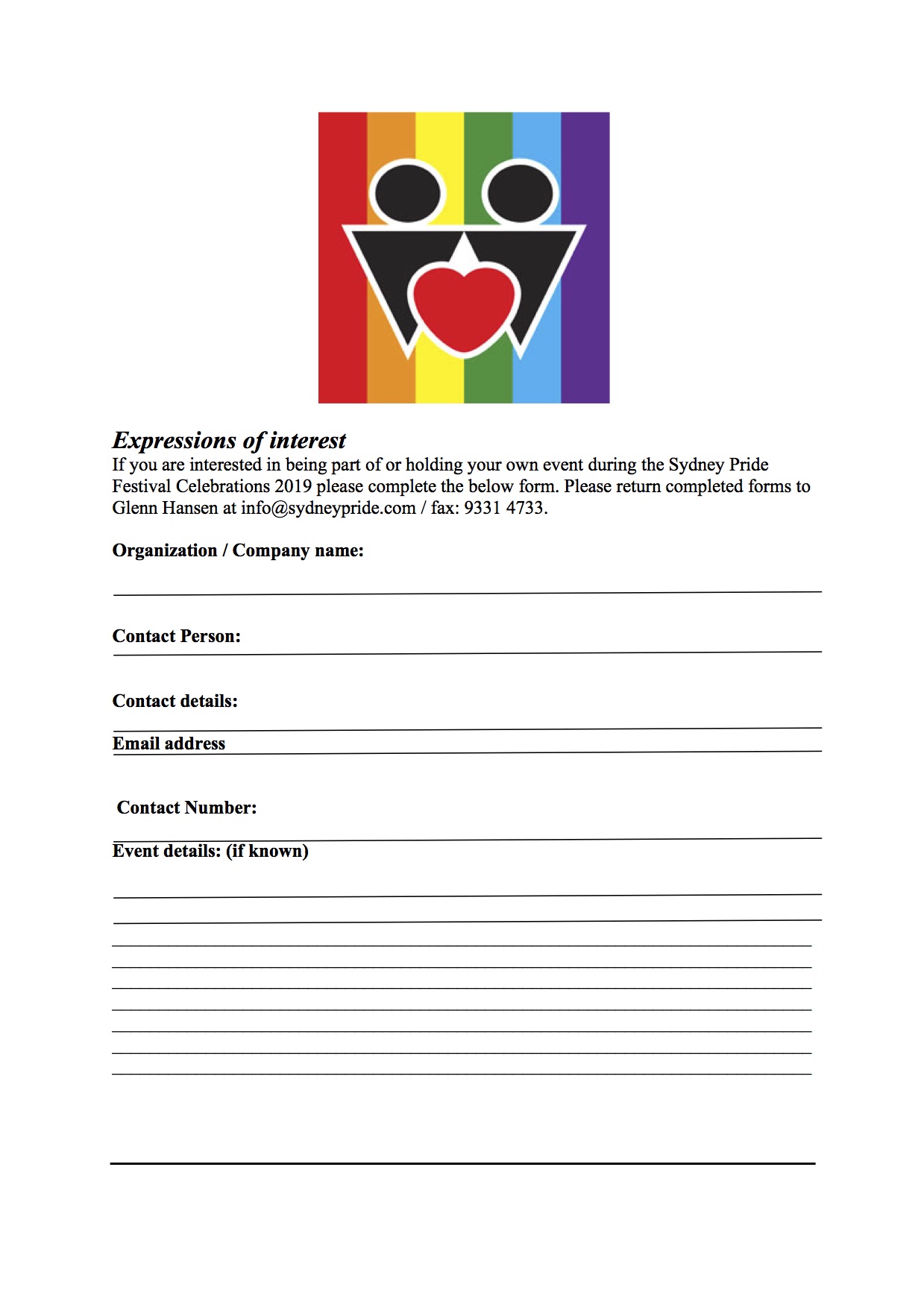 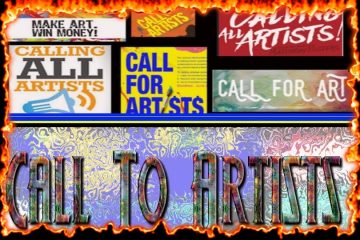